Pratt & Whitney Rocketdyne’s Enterprise Thinking Network welcomes Barnet Bain to lead our sixth Ongoing Discussion on June 24th and 25th (and our 126th session since we began in 2000). 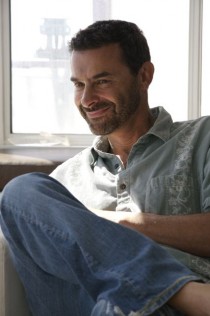 For his title, Barnet has chosen “From Spectator to Spec-Actor,” a fitting topic to focus or conversations on the transformation process he’s been engaged in, both personally and through his films, including the Academy Award winning movie “What Dreams May Come.”  As for Thought Pieces, Barnet has selected a 3-part interview he conducted in April with Filippo Voltaggio on the topic of subtext (links to Part 1, Part 2, and Part 3), plus his online column, The Tao of Hollywood (link to be included).

Please join your Ongoing Discussion colleagues from across the country and around the world for a conversation with Barnet on a theme that embraces the fundamental way in which the “prevailing system of management,” as defined by Dr. Deming, serves to perpetuate a set of beliefs that are self-limiting for a rapidly changing world.   As a case in point, if our organizations are in need of being able to do “more for less,” then teamwork offers the value proposition of being able to work, learn, and innovate together.   For a team to “work together,” the members participate on the team, rather than serve as spectators of the team.   In doing so, apparent “spectators” become “spect-actors,” in Barnet’s simple play on words, wherein participation is a necessity for team work.

In consideration of World Cup soccer (or, football for those outside the US), a player who is removed from the match, late in the game, to allow for a substitute player with more energy, is still a member of the team.   So is the coach who guides the efforts and the many assistants who prepare the players before, after, and during the match.   As the saying goes, “One for all and all for one,” and the efforts to score and win are well understood to be caused by the team, which extends to include equipment suppliers and customers, including us the fans.   Who’s to blame for a disappointing outcome if all are “one”?   Should blame be directed at another teammate, leading to “spectator” status, or to oneself reframed as response-ability, leading others to become “spect-actors.”  Is blame itself an obsolete management mindset?

Much the same can be asked re legislators who are elected to government, be it in the UK Parliament or the US Senate.   For these officials to blame a faceless “Wall Street” or other specific corporate executives, is to bring into question the status of the officials, who have thereby adopted spectator status.   Far different would be for the Senators to inquire as to how the legislation contributed to the disappointing outcome and to see their own role in it.  Likewise, far different would be for automobile drivers to see themselves as spect-actors of the recent BP oil spill in the Gulf of Mexico.

In reviewing Barnet’s “Thought Piece” videos and online articles, be     prepared for an enlightening conversation with a movie director (The Lost & Found Family) and producer (What Dreams May Come) who has been on a long journey from spectator status to spect-actor status.   Join in for an explanation of how this journey has changed the selection of the movies he directs and produces, how they are directed and produced, and how he lives his life.   In a recent conversation with Barnet to prepare for his “OD” appearance, the following questions were raised and explored, as examples of the state of his thinking about team work;